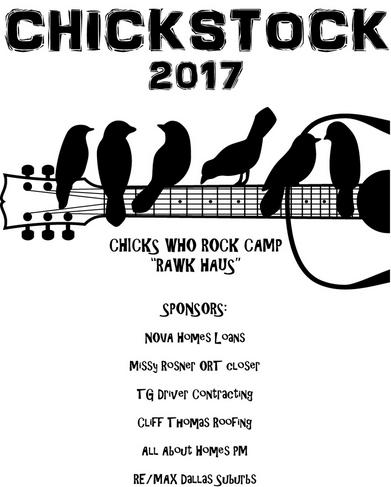 Our Amazing Sponsors since 2017

In early 2020 Kids Who Rock found a great spot in Rowlett where we are members of the Rowlett Chamber of Commerce.  Laura suggested we check with the Church in the City to host our camp as the designated spot because it is a very big space and they are an awesome group of people.  It was great! KWR Camp 2020 volunteers went to CIC to clear the space, clean it up, and set up for a successful camp.  In the meantime, as everyone is aware, COVID-19 began in March and we had major concerns on whether to have the camp or not.  On May 01 many of the parents supported the KWR decision to wait until July 1 to see what would become of this unprecedented virus.  It seemed that the curve had been "flattened" and with the camp set up for 6' apart, sanitizing stations, & masks we felt fairly confident we could make it happen. 2 weeks - week #1 Chicks Who Rock Camp - then week #2 Dudes Rock Camp.

Shortly after preparing the space, the news reported a sudden "spike" in the Corona Virus outbreak and we all became very concerned. We had 5 days before camp started on July 13th,2020, and had to make a quick decision.  THE DECISION WAS MADE!

Patty and all of the AMAZING Kids Who Rock Volunteers decided to take the camp virtual even though some of the music instructors had never even been on ZOOM.  The hustle was ON!

In just 5 DAYS we, Patty and husband Thomas Driver, delivered 5 drumkits, 4 guitars with amps, 3 bass guitars with amps, 3 keyboards & 32 KWR guitar-designed bags with art supplies, chord charts, and everything we could think of that a student would need.  From Rockwall to Irving plus 2 kids from Colorado and one student from Washington (which we mailed their packets) the challenge was ON! We encouraged the kids who had their own instruments to take classes for those instruments.

Excited that the kids were willing & with the help of the parents we changed up the format a little by combining the two camps. The first week was mostly a meet n greet and a trial run for the following week.

We made up a point system for kids to earn points just for attending with the promise of using the point to purchase fun items from the "Kids Who Rock Shop" at the end of camp.

Through trial and error and a VERY COOL group of Kids Who Rock Family, we had instrument classes, Talent shows, and the "Rock Star Moment" which was aired LIVE on FB each day.

I am SO proud of the students, volunteers, parents, and my husband, Thomas Driver.  This camp is run by volunteers and kids are not charged to attend.

After the Kids Who Rocked the World Wide Web 2020 we delivered 32 "schwag bags" with the items purchased with the point system from the KWR Rock Shop and sent a Kids Who Rock Tee-Shirt to each Student.

It was a success because of our amazing sponsor who donate the funds to cover the teeshirts, instruments and cool art supplies so kids can learn who to play an instrument and take art lessons from some of the finest artists and musicians in the DFW area.

After camp, Thomas and I picked up all of the instruments, which were loaned on the honor system, and we had one of the best camps EVER that we could have imagined.

Stay tuned to Kids Who Rock for Camp information in July 2021. Send your child or make a donation or both. We never have charged anyone to send their child to camp since we started in 2015 with Chicks Who Rock Camp. That is what sets us apart from ALL of the other camps.

Thanks for reading and contact me if you have any questions, would like to donate or get involved to become part of the Kids Who Rock Family.